Little is known about how mammals navigate long distances in the wild. Do they memorize paths, follow smells or magnetic signals, or do they use multiple sources of information to create an internal map of their surroundings? Our current featured study investigates how Egyptian fruit bats (Rousettus aegyptiacus) navigate in the wild. Using a combination of miniature GPS data loggers and radio transmitters, Dr. Asaf Tsoar and his colleagues at the Hebrew University of Jerusalem were able to document detailed movements of 36 fruit bats, conducting several experiments to test how these animals navigate in familiar and unfamiliar environments.

Tracking individual animals offers a unique method for testing hypotheses about animal navigation. In the lab, researchers can conduct controlled experiments in a restricted area. But for species that travel long distances, a confined laboratory or field site might not properly replicate the animals' true habitat. Documenting their movements by GPS, in contrast, allows collection of high-resolution data showing where the animals travel in the wild after being released. 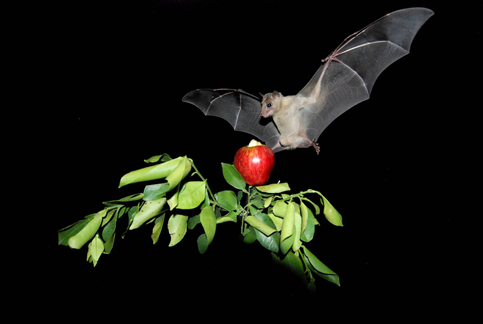 Where do the bats go? Egyptian fruit bats love fruit. Throughout Africa and west Asia, these bats roost during the day and fly out in the evenings to feed on fruiting plants. So Tsoar and his colleagues wanted first to observe them as they travelled between their roosting and foraging sites. They attached small tracking tags, each containing a GPS data logger and radio transmitter, to several bats from a colony that lives in a cave in central Israel, and tracked them for several nights. They found that the bats commonly flew several kilometers to the same tree on consecutive nights, and sometimes fed from the same tree for as long as four months. The bats flew quickly and directly to these trees, ignoring other trees of the same species that they passed along the way.

Next, the researchers asked, how do the bats find these trees? Do they follow a sensory cue, such as a smell or the site of the tree? Have they learned a series of landmarks or specific direction that will lead them to the tree? Or are they able to combine information about their surroundings to create an internal map, known in biology as a "cognitive map", that they use to navigate? The first possibility seemed unlikely, because the trees were too far away to be seen from the cave, and route was filled with smells of similar fruiting trees.

Can the bats find their way home from an unknown location? To determine whether the bats follow a memorized path or are able to navigate in a more flexible way, the researchers performed an experiment. If the bats are simply following a route they have memorized between their cave and the foraging tree, then they should become disoriented and lost if they are released from an unfamiliar location. To test this, the researchers brought a group of the bats to the Negev Desert, an area 44 kilometers to the south of their cave and well outside the area within which the bats are known to travel. Over three-quarters of the bats were recaptured near their colony, and data retrieved from the GPS tags showed that the bats flew directly home after being released. Further they found that the bats seemed to be able to choose between flying straight to the cave or stopping first to eat: bats that were fed and released late at night were more likely to fly to the cave, while those that were released earlier without food were more likely to fly to their normal foraging tree. These results indicate that the bats have flexible navigation skills allowing them to find their way to a desired location over a large area, perhaps by following smells, a magnetic gradient, or by interpreting the location of far-away visual landmarks.

Can they navigate to their chosen location from a distance if large landmarks are not visible? Since it seemed possible that the bats are navigating by recognizing large visual features, the researchers designed a second experiment, this time to test whether the bats could navigate home from a place with much more limited visibility. The researchers took a group of tagged bats to a deep, steep-sided valley, known as a makhtesh, 84 kilometers south of their cave, from which the bats could not see any of their familiar area or any large regional landmarks. They released half of these bats from inside the valley, and the other half from the ridge of the valley—still very far from their home, but from an elevation where regional landmarks are still visible. The results show that, while those bats released from within the crater seemed to be initially disoriented, they left the crater headed in the correct direction, and both groups were just as likely to find their way back to home from this distant location.

Tsoar and his colleagues found considerable evidence to support the idea that Egyptian fruit bats are indeed able to navigate over large areas using a "cognitive map", and they conclude that visual landmarks likely the most important part of this map. However, they also showed that these landmarks are not all they use: even when all landmarks were blocked by the hills of the makhtesh, the bats were able to eventually determine the direction that would lead them home. This suggests that bats are able to use some other type of information to navigate—possibly a smell, a magnetic signal, or celestial cues. This study provides new evidence for how bats navigate, and for the existence of "cognitive maps" in wild mammals.

To view a few of the tracks that Tsoar and his colleagues collected, go to their Movebank study and select View > Show in map or click on Tracking Data and browse for the study "HUJ MoveEcol Lab Israel: Egyptian fruit bat Rousettus aegyptiacus".

Tsoar A, Nathan R, Bartan Y, Vyssotski A, Dell'Omo G, Ulanovsky N (2011) Large-scale navigational map in a mammal: Proceedings of the National Academy of Sciences of the United States of America 108(37): E718-E724.