In 1968, a fence was constructed in northern Botswana to keep domestic livestock safe from wild predators. For zebras living at the Okavango Delta, this was an unfortunate development, because the fence blocked their access to the Makgadikgadi grasslands, where they went every year at the start of the rainy season in spring to spend the summer foraging on protein- and nutrient-rich grasses. For 36 years, the zebras could not make this migration. In 2004, the fence was removed, and within three years the zebras were again making their annual migration between the Okavango and the Makgadikgadi. 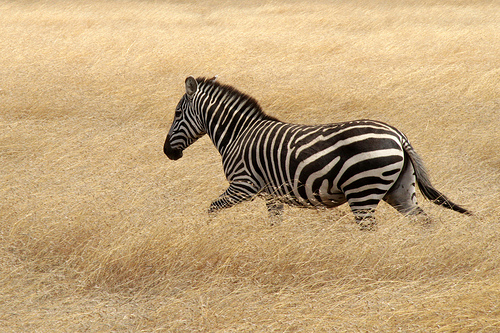 But how did the zebras know to do this? After 36 years, none of the zebras alive before the fence was built were still around. Not only did they go to the same location—they also went at the same time, which is important because until the spring rains fill the oases at the Makgadikgadi, there is no water to drink. In this feature study, Hattie Bartlam-Brooks, a PhD student at the University of Bristol, led a study that attempted to answer this question.

Bartlam-Brooks and her colleagues suspected that the zebras chose when and where to migrate based on the environmental conditions around them, and that the conditions near the Okavango Delta might indicate important information about the conditions at the Makgadikgadi, over 200 km to the southeast. To test this idea, they attached GPS collars to seven adult zebras (Equus burchelli) in the southeastern Okavango Delta to document their movements over the course of several months. In addition, they accessed satellite-derived information about rainfall and vegetation for the area: the Tropical Rainfall Measuring Mission, which estimates precipitation rates, and MODIS-derived normalized difference vegetation index, or NDVI, which provides an estimate of primary productivity or vegetation greenness.

While all of the models worked somewhat well to explain the recorded zebra movements, those that used rules based on environmental conditions were consistently better than those that didn't. The model that best predicted the recorded zebra movements contained the following rules: the zebras begin migrating when the weekly total precipitation at the Okavango Delta reaches 2.5 mm, and then move toward the Makgadikgadi at a speed that depends on the rainfall and NDVI (vegetation greenness). They migrated more slowly when the NDVI was high, meaning there was probably plenty around them to eat, and more quickly when there was more rainfall. This model explained more than 90 percent of the zebra movements recorded by GPS tracking.

The results of this study may have important implications for conserving these and other terrestrial migratory species. The zebras appear to be able to quickly adapt their movements to different environmental conditions, which could prove essential to withstanding the future climate changes predicted for the region, including reduced rainfall and an increase in climate variability. This information could also help wildlife managers predict zebra movements throughout the season, allowing them to develop flexible conservation strategies. The new Env-DATA System on Movebank offers users a free method to easily link animal movement data to many datasets like the ones used in this study, making it easier for researchers and wildlife managers to ask and answer similar questions about how movements in other species relate to their environment.