The featured study "Swainson's Hawks" is a great example of the value of satellite tracking studies and of collaboration and data-sharing between scientists. This study, led by Michael Kochert, emeritus scientist with the U.S. Geological Survey, shows the movements of 43 Swainson's hawks during part or all of their annual migration from western North America to Argentina and back.

Why track animals with satellite tags? Tracking animals using satellite tags has allowed us to better understand the year-round movements of many species, including bird species who migrate long distances every year between breeding grounds in the north and non-breeding grounds in the south. Since the advent of satellite tracking technology, our knowledge of where these animals go when they leave their breeding areas—often to places where ringing recaptures and recorded observations are rare—has increased dramatically. However, there are also challenges to studying animals using these technologies. The tags are expensive and can only be used on animals large enough to safely carry the tags, and animals must be captured in the wild so that the tags can be attached. For these reasons, researchers can only use satellite tracking methods for certain species, and often only have resources to collect data for a small number of animals, whose movements may not be representative of a whole population or species. 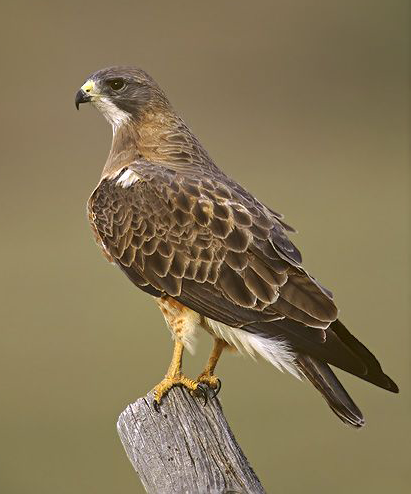 The Swainson's hawk (Buteo swainsoni) is a large raptor that breeds throughout western North America and typically migrates over 10,000 km (6,200 mi) each year to Argentina. To gain a more comprehensive picture of species movements, a group of researchers from across North America* worked together to deploy satellite tags and analyze the resulting tracking data. Between 1995 and 1997, Kochert and his colleagues were able to tag 46 Swainson's hawks across their huge breeding range, from California to Minnesota to Alberta.

In all, the researchers were able to track 34 birds as they migrated to Argentina between August and December, and 20 birds as they migrated back north again between February and May the following year. Their results show clearly that the hawks are broadly spread across western North America during the breeding season, take one of three general paths toward Central America, and then fly along a narrow corridor through Central America and down to Argentina. The next year, they fly along the same path to return to the breeding grounds. The satellite data also allowed them to identify where and for how long the birds made stops along their migrations, and to identify a specific area within Argentina where the birds spent most of their time after migrating to South America.

In the case of Swainson's hawks, using satellite tracking to identify the birds' wintering grounds has also been essential for conservation. In 1994, biologists from the US Department of Agriculture Forest Service noticed a large decrease in a Swainson's hawk population in northern California. To investigate the cause of this decrease, they tracked a few individuals with satellite tags in 1994 – 1995 and then followed the hawks to their wintering grounds in Argentina. When they arrived, they surveyed the region to observe the habitat and behavior of the hawks. During their survey, they came across a location with over 700 dead Swainson's hawks. Talking with local landowners, they realized that the birds were most likely being poisoned by insecticides being sprayed on farm fields. Swainson's hawks, notable among raptors for their love of insects, were eating sprayed grasshoppers and being inadvertently poisoned. Reaction to this discovery led to more research, regulation of pesticide use, and farmer education, which greatly reduced fatalities of the birds in Argentina. Some of the data collected by Kochert and his colleagues were used to help identify the most important areas for pesticide control. As of 2001, the use of the pesticide monocrotophos, the main cause of the problem, was almost completely eliminated in the region.

To view the tracks that Kochert and his colleagues collected, see here or click on Tracking Data and browse for the study "Swainson's Hawks" in Movebank.